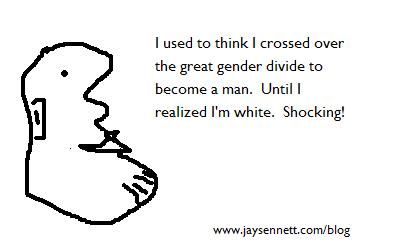 As I read through the comments here about trans-phobic feminism a thought process has finally crystallized for me.

A problem with trans-phobic feminism, as well some other forms of feminisms, centers around seeing my transition/masculinity as the primary site/reason of my newly found privilege.

But, in fact, my newly found privilege is as much about, if not more, about my race than my gender. By placing primary emphasis on gender as the source of privilege in FtMs, feminists - most of them white - reassert racism and white privilege.

If a black butch lesbian transitions, most of us understand that he does not rise to the top of the food chain like I did and do. Whether butch or black man/FtM, he resides in an ambivalent place in white America.

I’m guessing this is also true for other FtMs of color.

Claiming that gender is the primary signifier of privilege, or lack thereof, seems both White and wrong. Wrong because other realities - class, size, ability among them - have as much impact on the assumption of privilege as does gender. In some instances, race among them, gender seems to play second banana.

In the end, my biggest problem with most feminisms - whether they are transphobic or not - is a failure of imagination. Once gender is posited as the biggest oppression, others fall out in some silly hiearchary of oppressions.

But people don’t live their lives that way. And in my experience, I can go from being a very privileged white man on my job to being discounted and dismissed in some gay and lesbian communities as an FtM.

Privilege is not hiearcharical as a lived and living experience. It is distributed across multiple sites through constant interaction with our chosen environments.

In America the racial adjective always precedes the gender adjective. I am always a white man. Never a man white. Unless I’m writing poetry, which thank the goddess for all of you reading this blog, I don’t.