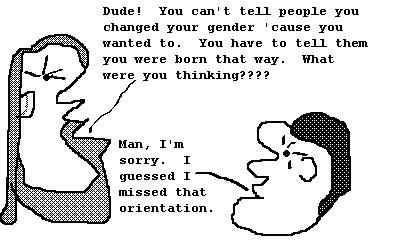 My pal Az at going somewhere has a great post about the failure of nationalistic metaphors to describe transsexual experiences.

The value of his efforts recently came home to me. A non-trans friend and I discussed acceptable metaphors and stories that she as an African-American lesbian and I as a white transsexual man can say to our communities and the world at large.

We both agreed it unacceptable in a collective sense to say to our communities and the world, “I changed my gender (or became a lesbian) because I wanted to. I chose it.”

Talk about cognitive dissonance. When I have told people I chose to change my gender their faces cloud over. My answer must not have been a box on their transsexual checklist.

Every origin story told to me by others about my experiences spiral down to one presumption:

That something in my biology or spirt or whatever, something inside me - beyond my control -made me transsexual.

(My favorite origin story: I became transsexual because I am tall (6’ 2″)…..) Ten years ago when I first started hormones, transsexuals were radical. Now academics write that our choices support the binary gender system. Doran George’s recent piece does nothing to change my opinion.

“The transsexual, unlike Bell’s [performance artist] description of transgender, identifies unequivocally with the sex they wish to become….Bell however sees this kind of passing as a reluctant conforming to the bi-polar gender divide and a self-regulatory procedure, and delights in exposing the performativity of gender……”

[Note: I don’t know very many transsexual who identify unequivocally with the sex they wish to become {not that anyone does} and the assumption that transsexual can’t expose the performativity of gender, while transgenders can, combined with the false notion that transexuality is a form of passing……YYYYYEEEEOOOOOWWWWWWWWWWWWW!!] So here’s what I to say, besides STFU:

If you haven’t had a transsexual experience, I don’t really want to hear your opinion about my choices.

If you are transsexual and insist that I was born this way, I don’t want to hear your opinion, either. You haven’t taken the time to understand me or my experiences and refuse to honor complexity.

If you are transsexual and strive to find appropriate metaphors for our experiences, dump all metephors relating to travel and nationalism. Going from male to female isn’t like travelling between London and Paris. And transsexualism isn’t like living in exile.

If you are either transsexual or non-trans, and think we’ll find nirvana by acting like everyone else, stop with this ridiculous conformity around origin stories and motives. I don’t need to tell myself a story about why I changed my gender. The more I do this thing that I do, the more I see it as something I wanted, and still want, to do.

If people deny me my rights because of my choices, I say, “we don’t discriminate against people because they choose Catholicism or Judaism. How is this different?”

How is this different?

We are unique. We deserve different metaphors. I know “it really isn’t a big deal” doesn’t get us much sympathy. But if it’s true, it’s true.

Ten years ago transsexuality seemed like a new frontier in America. We were exploring our options and availing ourselves of the technology available to us. That excitement about revolution now seems gone. Drowned under “oh we were born this way” or “transsexualism supports the binary gender system.”

I never changed my gender to conform. Travel and Nationalistic metaphors and unthinking academics don’t serve my soul well. Maybe they work for other transsexuals, but not for me.

In the end, only we can communicate what is most true for each of us. And in the end, the revolution will occur, in part, when we support every human being’s right to claim and tell their own origin stories.