Gender As Branding As Label 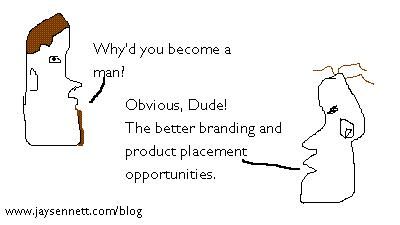 Of course, I will probably be killed in people’s heads for claiming that gender is branding.

I thought of this equation as I pondered an unfortunate cover piece in Newsweek.

Very little is known about the first woman to become a suicide bomber for Al Qaeda in Iraq, except that she dressed as a man.

And it goes downhill from this opening statement.

The subtextual vibe: women are in thrall of strong, persuasive men. They get duped.

Getting duped is part of the brand expectation for women, right? The guys that blew up the WTC and Pentagon were never duped. Crazy. Check. Extremist. Of course. But the press, I don’t think, claimed they were in the thrall of Osama Bin Laden.

Brand America = Can’t figure out this whole gender thing to begin with, and then those entralled, controlled vessels of Muslim feminity dress like men! To blow some shit up!

Thank the goddess Newsweek editors had the sense to include a sidebar by the always illuminating Lorraine Ali.

If I’d never known a Muslim woman, I’d probably pity any female born into Islam. In America we’ve come to see these women as timid creatures, covered from head to toe, who scurry rather than walk. They have no voices, no rights and no place outside the home. But I grew up around secular Muslims (my father was an Iraqi Shiite) in Los Angeles, stayed with ultrareligious relatives in Baghdad and met dozens more Muslim women on travels through the Middle East.

Her even-handed, lived experience can’t counter balance Christopher Dickey’s vibe of Muslim women (and women in general) as a brand of creatures utter lacking in will. I guess this is why the donning of men’s clothes to achieve an albeit heinous end baffles him.

People flip out when their brand expectations get thwarted. In the same way, I think, that we flip out if our iPods (a brand known for being cool and elegant) were to suddenly look like the old chunky cell phones, some of us flip out when gender, _the_ original, reliable, fixed, brand comes out with a new, improved, or different version, offering new product placement opportunities in our minds.

Some of us don’t know what to do with Gender v.3456543. Some of us think that words actually describe the thing referenced. Labels are somehow real. But women wear men’s clothes! To blow some shit up!

And we don’t know what to do with that one. Brand/Label - Thing relationship remains one of our most enduring quandries. Alfred Korzybski, the father of General Semantics, said, “The map is not the territory.”

Gregory Bateson, in “Form, Substance and Difference,” from Steps to an Ecology of Mind (ISBN 0226039056), elucidates the essential impossibility of knowing what the territory is, as any understanding of it is based on some representation:

We say the map is different from the territory. But what is the territory? Operationally, somebody went out with a retina or a measuring stick and made representations which were then put on paper. What is on the paper map is a representation of what was in the retinal representation of the man who made the map; and as you push the question back, what you find is an infinite regress, an infinite series of maps. The territory never gets in at all. […] Always, the process of representation will filter it out so that the mental world is only maps of maps, ad infinitum.” (via wikipedia)

The issue of women blowing up themselves and others to achieve their goals is about behavior. The same thing for men doing the same thing.

The problem is that some of us believe we are the labels and brands. We’re buying what we’re selling, then get mad, confused, baffled and pissed when people act like the human beings we are. Shocking!