Of Man Pies, Anatomy and Identity 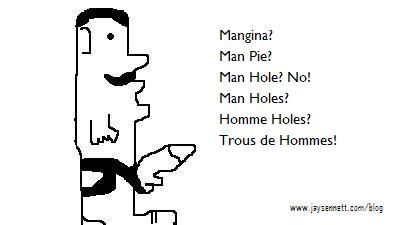 Guys with Pies. Maria over at Daily Dose of Queer emailed me about this phrase. Dan Savage, Mr. I’m Moving to Canada if Things Don’t Go My Way (Mr. IMTCITDGMW), needed several trans fags to set him straight (pun intended) regarding a gay man’s fanstasy.

He wants to have sex with a trans fag. Mr. IMTCITDGMW declared it The Impossible Fantasy.

Not likely. And some bright, articulate transfags said as much to him via letters. (Read more here)

Besides Mr. IMTCITDGMW supreme stupidity on transfags, what strikes me:

Why not coffee cake? Or ruegelah?

I asked the Divine Ms. H. if she had ever heard of a vagina being called a pie.

“A cherry pie,” she responded.

“But how does a vagina look like a pie?”

“Well, it’s triagular shaped,” she said as she gestured downwards with her v-shaped index fingers. “And cherry because, you know, we bleeeeeeeeeeeed!”

“Oh,” I said. “I thought ‘pie’ referenced the circular shape of the whole pie!” I leaned back in my chair. “And maybe cherry since it references the hyman.”

The whole phrasing, whether for men or women (or anyone else for that matter), strikes as whacky. Pie?

How ’bout letting guys and gals name it as they claim it?

In the trans/transsexual equation, anatomy trumps all. Even though the State and Federal G-men have agreed that I am M, my trous de Hommes forces me to qualify my trou with an adjective. Where there used to be vaginas, now we have male vaginas.

Think about this juxtaposition. Male Vagina. I have changed my gender legally and socially and culturally and bodily. Is this anatomy of mine, then, a pie or something else entirely? If it is a love box, then my bureaucratic records become null whence I drop my shorts. If it is not a pie, then how do I name this anatomy?