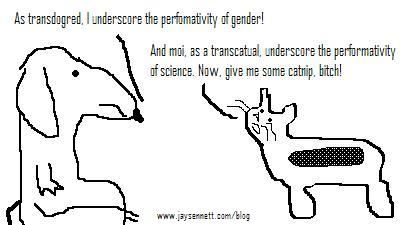 Alas, I know I should care more about these label wars. After all, on the U.S. left, we trade in radicalness. No one wants to be average or ordinary or, gasp, normal.

The whole thing borders on ridiculous, though. Radicalness derived from labels?

What wows me about the whole transgender/transsexual divide: ten years ago, when the modern trans movements began emerging, we used the argument that everyone is transgender.

You know, because transsexuals were way too out there for most gays and lesbians and transgender described people who were neither cross-dressers nor transsexual. (In fact the term itself, I believe, was coined by Dr. Virginia Prince, who worked for Harry Benjamin.)

Radical is as radical does.

[Note: I can’t even get excited anymore when certain gay men use certain gay publications to state that transsexuals and transgenders should be more subtle. And I really can’t get excited by the reactions to said editorials when transsexual folks claim we all have the same issues……am I the only one who thinks the name change and birth certificate changes allowed by some states can be overchanged/not recognized by certain wack-jobs?]