The Truth About Early Transgender Transition

The self-obsession I engaged in during my early days on hormones only became apparent in retrospect. Boy was I embarrassed.

The realization that I described my fears and sufferings in pitiful attempts to get dates gobsmacked me.

Why couldn’t I just speak kindly and trust my winning personality to get a date?

Then I doubly gobsmacked myself.

A vein of self-pity runs through masculinity, focused on how hard we have it, whether from family or work or school. This vein seems to function like gold for a gold digger for femininity, with its directives to always be helpful and suppress oneself for others.

As an FtM I mined this vein for my own nuggets: bathrooms are scary! why didn’t so-and-so get my new name/pronouns correct?!? they almost called the police on me!!!!

Of course these situations scared me. They would scare most people. But I managed to transform the fear from a rather ordinary - but terrifying - part of my life into a tool in my dating toolbox, one I used, I’m terribly sorry to admit, to get dates. 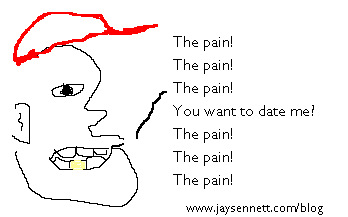 Lack of interest in a potential partner’s suffering plays a key role in this tool. Self-pity always sucks oxygen out of the room, regardless how many people it suffocates. People trained to suffer in silence - and this seems to be more true for women than men, particularly middle class white women - leap at the opportunity to subsume their needs and desires to help out their man/FtM/butch.

As an FtM I believe I possess many of the least desirable traits of masculinity. My previous life offers no exemptions. Yes, my status as a man is conditional. A quick snip with some scissors to cut off all my clothes reveals my complicated bodily status.

This same body moves through the world as a man, all the time. I’ve learned over the years how much people want to serve me and make me happy simply because I am a white man, a person perceived to have most everything from people who have less, or even very little.

Femmes and feminine-identified people look at FtMs like me complaining about how tough it is and probably wonder, rightfully so, why I am such a whiner. Self-pity engenders resentment in the listener and laziness in the speaker.

I never had to really touch my feelings of terror as long as I could complain about it. I never had to ask a woman I was interested in how she navigated a world where men lear at women, stalk them and harass them every minute of every day.

No. Self-pity hid that reality from me.