The Most Important Thing You Need to Know About Transgender 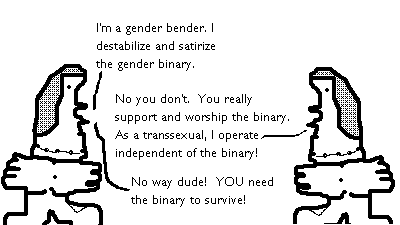 By far the best part of blogging is reading the comments.

piny, a sometimes commenter here, yesterday offered one of the most astonishing definitions/schema for gender-bending/transsexual I’ve come across. piny responded to a statement from Nick Kiddle, who sometimes blogs here.

That link made my [Nick Kiddle’s] head hurt. What does it take to get people to understand the difference between “woman-identified, not medically transitioning” and “recreational cross-dresser”?

Those distinctions are just window-dressing. There’s gender-benders and there’s trans. The gender-benders claim to destabilize and satirize the gender binary but really just support and worship it. The trans claim to act independently of it but actually need it to survive. Sometimes, the two categories are completely different, and sometimes they inexplicably melt into an undifferentiated whole.

That’s all you need to know.

piny is absolutely right. Chuck your queer/trans theory books out the window. (Unless you want to keep them around to impress the babes.)

piny has explained the trans universe for all. Neat, tidy, and I’ve drawn a little cartoon as a reminder, in case you forget.

Another Transgender Cartoon » » The FtM Can’t Be Sexist